Many people would say, “the day I met my spouse,” or “the day my child was born” or something of that sort, and he agrees. They were all wonderful days. But the day he considers the best day, would be the day seeing his wife alive.

A few years ago, Jady and his son were driving with his wife, Olivia, were in another car right behind them. They were stopped at a red light, on their way to the Saint Street Inn for a Sunday Brunch. As the light turned green, with hardly any traffic out, they proceeded into the intersection. And that’s when Jady heard the sounds of the tremendous impact of two cars colliding.

Jady thought to himself, “That was a bad wreck that happened right behind us, not sure who hit who.” And that’s when it hit him. His wife and her friend JoAnne were in the car behind him. It took him a few seconds to process the information, and then he immediately turned around to aid his wife and her friend.

“I remember thinking that car just hit the passenger side of JoAnne’s SUV, right where Olivia was sitting. I thought — she is dead,” said Jady.

But it was at that moment, the back door of the SUV opened, and both Olivia and JoAnne crawled out, shaken up and confused.

“Best day ever? Not too sure, but I was pretty happy to see Olivia alive. I have thought about that moment, that day for a while now. It was a good day!” commented Jady. 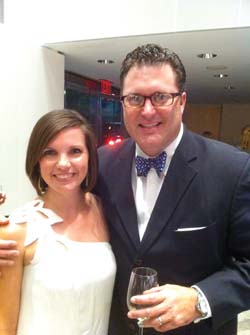 It may have been an awful situation, but all that Jady cared about was that his wife was alive and unharmed, and we are so thankful for that. Otherwise, this story might have been more about the worst day of his life.

We are so thankful that Olivia and JoAnne weren’t injured, and that things ended up alright! If you are thankful that they made it out alive, then SHARE this post!